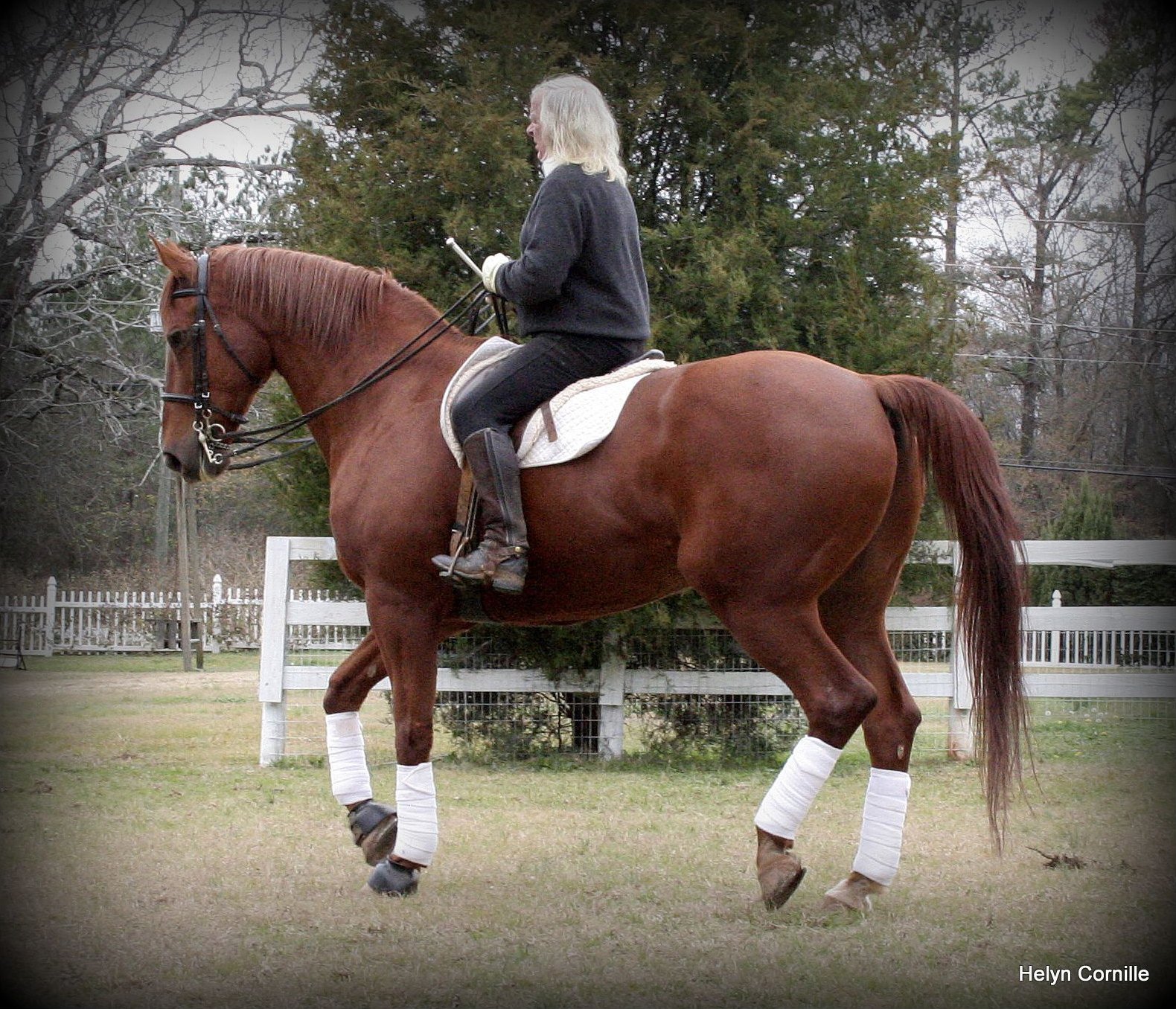 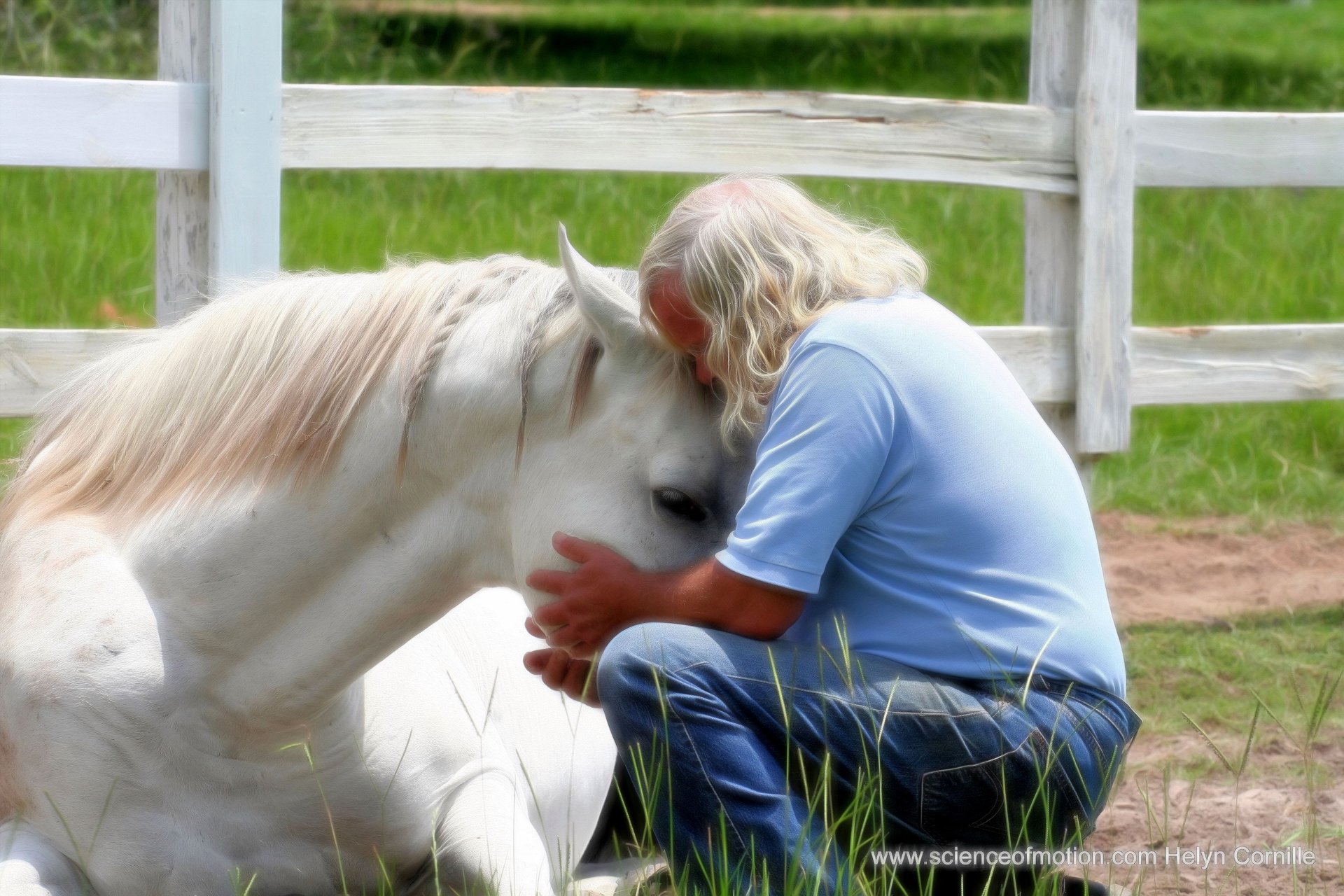 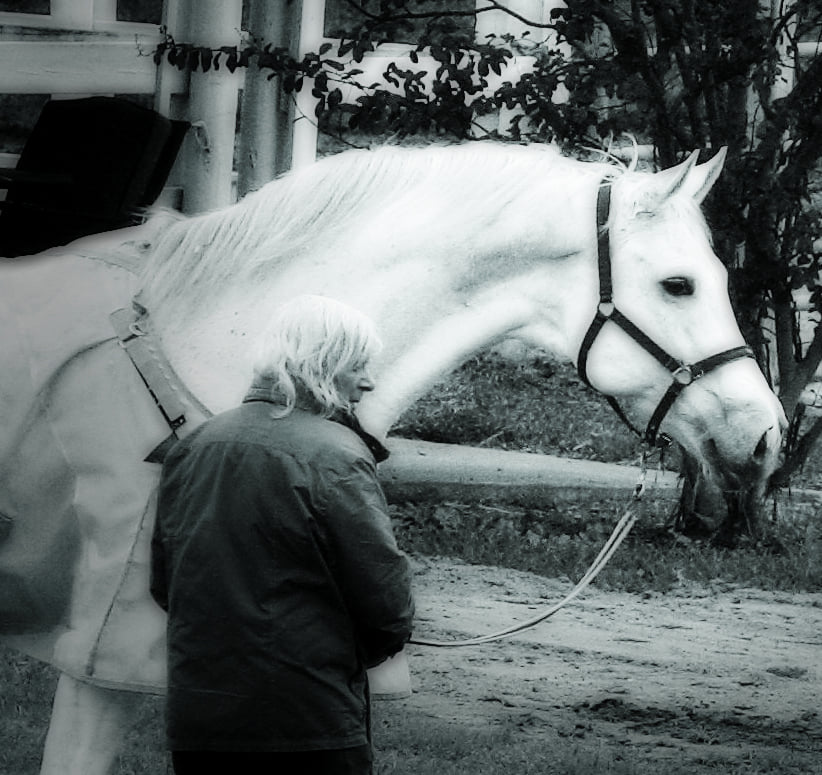 “A gifted horse will lead a good rider to victory. A great rider will give the horse the gift of soundness”

Jean Luc Cornille M.A.(M.Phil) has gained worldwide recognition by applying practical science to the training of the equine athlete. Influenced by his background as a gymnast, Jean Luc deeply understands how equine training can be enhanced by contemporary scientific research. A unique combination of riding skill, training experience and extensive knowledge of equine physiology enables Jean Luc to “translate” scientific insights into a language comprehensible to both horse and rider. This approach has been the trademark of his training.

Jean Luc graduated from the French equestrian training school Le Cadre Noir de Saumur and had the opportunity to train with riders including Joseph Neckerman and Willy Schulteis in dressage, Hans Winkler in jumping and Michel Cochenet in three-day eventing. Margit Otto Crepin, French Olympic competitor, is one of his dressage students.

Jean Luc specializes in establishing better performances, on the flat and over fences, resolving idiopathic lameness, educating how to avoid rider-induced lameness, improving the quality of the horse’s daily life, and educating on specific syndromes like navicular, club foot, kissing spine and muscle imbalances.

The Science of Motion approach works based on the scientifically proven fact that the kinematic abnormality is there first and it is the repetition of abnormal kinematics that causes injury. Every horse moves differently and since none move perfectly, especially with a rider on their back, even minor defects in gait can eventually result in lameness. As with human athletes, careful analysis of how a horse moves and the use of an individualised training program can both enhance performance and rehabilitate injuries, including those resulting in chronic lameness. By correcting the abnormality, if done early enough, it is possible to prevent pathological changes. Furthermore, once damage has already altered the integrity of the muscle, ligament or bone structure, correcting the abnormality is imperative for recovery and soundness.

This approach has been successfully utilised to rehabilitate many different chronic disabilities including severe cases of navicular disease and kissing spine.

For more information about Science of Motion clinics in the UK visit https://www.organisedequestrian.com/science-of-motion-clinic/

To book a video assessment of your horse with Jean Luc, visit https://www.organisedequestrian.com/video-lessons/

For more information about the Science of Motion IHTC (In Hand Therapy Course), visit www.scienceofmotion.com

“When I was thirteen or fourteen years old, I had difficulties as young gymnast with the landing of the third summersault. The two first were executed in a collected posture and the third one was performed with the body in extension. Almost inevitably, I had to correct a compromised balance adding a small sidestep to the right. The fault coast 0/10 of a point which is often the difference between winning and losing. My trainer reacted like a horse trainer. He changed the tack selecting more elastic underwear and lighter clothing. He focused on the footing by purchasing thicker rubber mats. He tried reward and punishment, and then finally decided that I had an attitude problem, that I was lazy and that I was adding a step to annoy him.

Then I was lucky enough to be selected for an International competition. I worked with a higher level trainer who identified the source of my difficulties. I had developed an imbalance between the right and left side of my back muscles. I was not fully straight turning the summersault in the air and the landing was off balance. With the appropriated gymnastics, the trainer and the physical therapist corrected my muscular’ imbalance and I was able to execute square landings.

Later in life the horses took over my passion for gymnastics, I expected for the horses, the same level of physical evaluation as I have as an athlete in training. Rather, it was as though performance analysis did not exist. When the horse’s neck was rigid, I was advised lateral bending of the neck, if the horse lacked forward-motion I was told to use larger spurs, etc. I decided that the primitive level at which equine athletic training was maintained was due to the fact that I was competing at relatively low levels and that training techniques would become more sophisticated if I had the luck to reach higher levels. With the help of few great horses I did. I was surprised that even at the Olympic level, better horses and skilled riders were still submitted to primitive training techniques. It was more sophisticated in terms of medical support, but the horses’ difficulties were managed either by the riders’ talent or the veterinarian’s skill. Problems were not scientifically analyzed and therefore never really resolved. The discrepancy between scientific knowledge and training techniques was the norm not only in France but all over the world. Astoundingly, the discrepancy remains today’s norm.

I decided to look at the scientific research to see if the problem was due to a lack of systematic investigations. The first surprise was that with a little curiosity, scientific studies were available. The second surprise was that scientific discoveries were pertinent and willing to enhance equine athletes’ performances and their propensity to remain sound. The question was why, in a sport where horses are so expensive to buy, train, and maintain in competitive shape, scientific discoveries that would further the quality of athletic achievements, the horses’ ability to perform at their fullest potential, and hence, to perform better and longer whilst still remaining sound, new scientific findings are not applied?

There is no rational answer, but there is an opportunity that I would love to share with everyone who dreams about winning in partnership with a horse athletically ready for the effort. Albert Einstein wrote: “I have no special talent. I am only passionately curious.” No one would really believe that the great scientist was not superiorly talented. Likewise, Margitt Otto Crepin who won the silver medal at the 1998 Seoul Dressage Olympics is a greatly talented rider who has the curiosity to consider that a more scientific approach would further Corlandus’ talent. Margitt succeeds with Corlandus because she was able to adjust traditional thoughts to the horse’s peculiar morphology. I had the pleasure to train her prior to the time she purchased Corlandus. I am particularly happy with her outstanding achievements and proud to have introduced her to this new level of thinking.

Having had the great opportunity to train with superb riders such as Joseph Neckerman and Willy Schulteis in dressage, Hans Gunther Winkler in jumping, Michel Cochenet in three day eventing, I have observed that the great riders have all opened the door of a new world. Their talent allows them to reach a level of sophistication in their riding that explains their successes but that they cannot explain why they master “the zone,” more frequently and for a longer period of time than average riders.

Everyone has experienced these instants of divine harmony where the horse and the rider perform effortlessly and at their utmost level. The “zone” is capricious, and addictive. One horseman observes that he was wearing a red shirt last time he was in the zone and hope that wearing a red shirt will recreate the divine harmony. Another rider could attribute the “zone” to the bit, the diet, the supplement, but never has there been a way to really control the “zone.” The “zone” occurs when circumstances created in the horse and the rider’s physique, muscle tone, elasticity, and coordination are most eminently adapted for the effort. Hence, the zone can be created if the education evolves from hearsay to scientific study of the equine physique and how the rider’s body effectively influences the forces acting on the horse’s physique. The “zone” is scientific, not mystic. The “zone” can be and should be the quality of daily life with the horse. Such quality cannot be achieved by integrating new and pertinent scientific discoveries with old training habits and beliefs. Rather success in the quality of the daily life of the horse as well as performance in the show ring, rests on one’s ability to question conventional wisdom in light of advanced scientific discoveries. It is a wonderful journey. Welcome. Jean Luc”

In Jean Luc’s presentation for Horsemanship Showcase, ‘A different Ball Game’, he explains how forces act between the rider and the horse and how when the rider understands this, they can help the horse to create movement beyond their imagination. By understanding these forces, the rider can cause the horse to use its body correctly and progress as a supreme athlete, without resistance.

The Science of Motion method is useful to everyone wanting to understand how to help the horse use its body most efficiently and comfortably, both preventing and rehabilitating lameness and enabling the development of a fine athlete in both horse and rider!

To find out more about the Science of Motion method and training course see www.scienceofmotion.com

To find out more about Science of Motion clinics with Jean Luc in the UK see https://www.organisedequestrian.com/science-of-motion-clinic/ 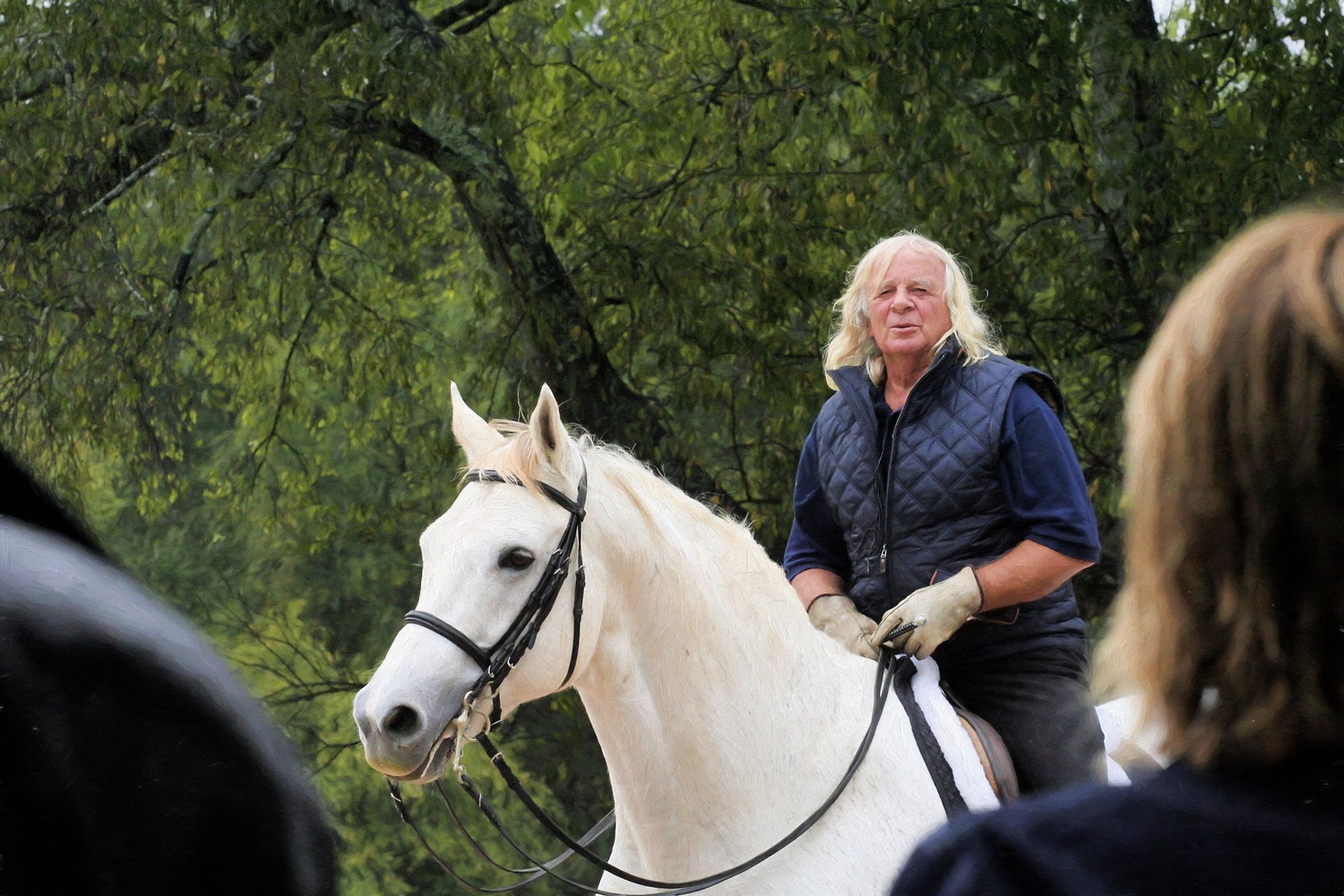 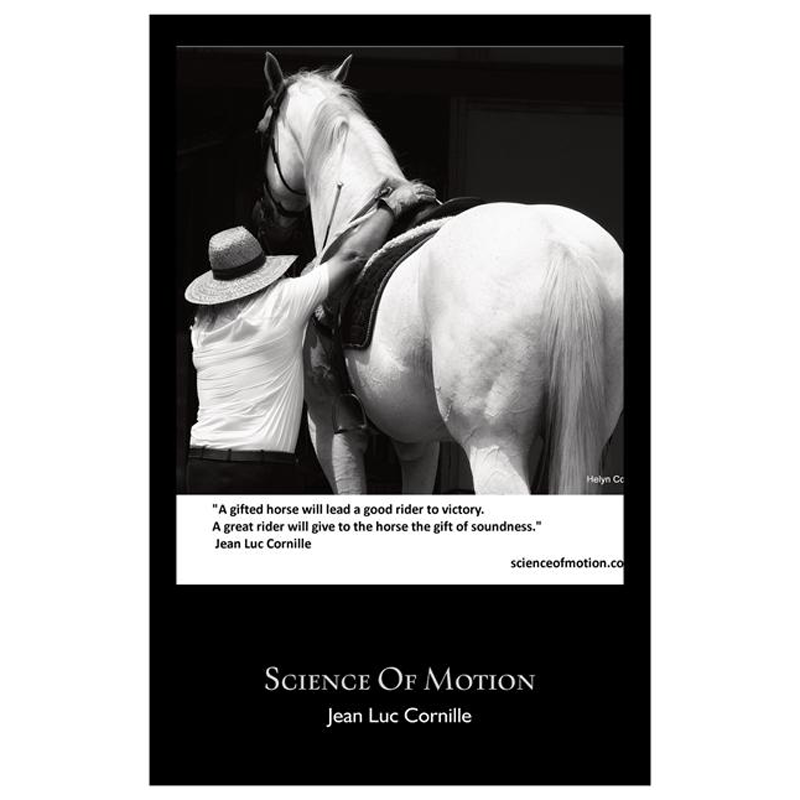 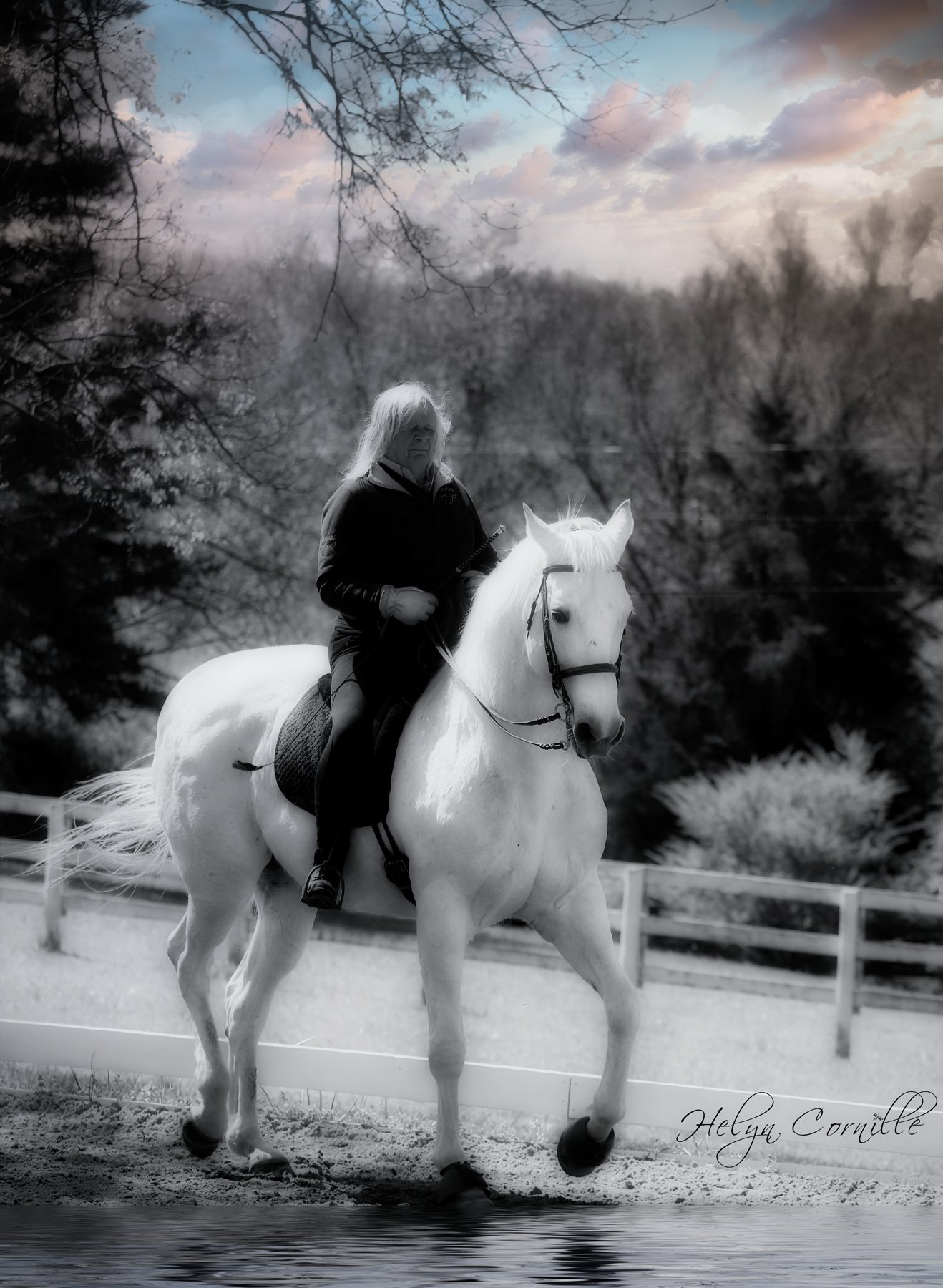